Chater of foundation of The Kingdom of Izzyshiper
The island of Izzyshipper was originally split into twelve separate Kingdoms, each one ruled by a separate Monarch. However, in 910 AD King Richard of the Kingdom of Izzyshipper united each of the twelve Kingdoms, either through diplomacy or war. Originally the King of Izzyshipper was not referred to as the monarch of the whole land, due to the offence it would have caused to the other heads if the 12 Kingdoms. Instead they were referred to as "Keeper and Defender of the Land," meaning he was superior from all other Kings of the land. Despite in modern times there is only one Monarch in Izzyshipper, the title of Keeper and Defender still remains.

Izzyshipper lead a rather quiet period in history in the next 180 years, with only a few minor wars and the line of succession ran smoothly. Yet that changed when King Alan II died in 1093, leaving no heir, the two men that made a claim to the throne were his brother Henry, Duke of Lorn and his brother-in-law John the Earl of Forrick. For the next twenty years where filled with warfare and both men declared themselves King. However in 1122 John of Forrick slew Henry in the Battle of Hernington, and held a formal coronation a few moths later. King Johns reign was short and he died eight years later, leaving the throne to his young son Prince George, (King George I) who was ten years old. His mother Queen Elena assumed regency for the young King for eight years and gave King George one of the best educations of any Monarch that had taken the throne before, and before he ascended the throne he could speak four languages, a keen grasp of all sciences and mathematics as well as rhetoric and history.

King George University
George’s reign was one of the most important in the history of Izzyshipper, during his rule the first university in Izzyshipper was created, several libraries and the King himself translated several foreign manuscripts including the Bible. After he died, he was known as King George the Learned for his scholarly contributions.

In 1273 King Alexander died leaving only his daughter for the throne. She was crowned Queen Alexandria, but was overthrown two moths later by nobles refusing to be ruled by a woman, their cause was strengthened by the fact that Alexandria had a poor grasp of court politics leaving the majority of her political decisions to her advisors. After she was deposed, the Duke of Vinera claimed the throne, crowned King Harold I, who would be later known as the False King. Alexandria was executed in 1275, and the citizens would give her the title "The True King" when King Harold's rule soured.

The Haroldian period of rule was disastrous the country was ravaged by wars which had the Izzyshipper at its knees. The population overthrew the Dukes descendant, Mad King Harold V in 1486 and put Queen Alexandria's only surviving relative on the throne, crowned King James II.

James’s reign saw stability return to the Kingdom, with several lucrative deals struck with some of the more exotic countries that were recently being discovered, allowing trade routes to be established bringing in spices, sugar and other rarities now being available in Izzyshipper.

By James’s death the Kingdom had recovered greatly, and his legacy was carried on by his successor, King Terrence III. The King’s reign was even greater than his fathers, his conquest expanded Izzyshipper’s borders, finally conquering the neighbouring Sevri Islands in 1531. He introduced the first poor laws in Izzyshipper, granting invalids and paupers basic food at the Church Parish’s discretion. He granted the Royal Charter to the third University in Izzyshipper, the University of Heath, and revoked the ban on Scholars publishing essays questioning the King or Churches role in the Kingdom.

With his wife, Queen Catherine, he had five sons and three daughters, the youngest of which was known as the Princess Mary. Throughout her life the young girl had gained a reputation for piety and devotion to god, so much so that when she turned 16 she begged her father to allow her to join a convent as a nun. As she was never considered a serious contender to the throne, the Princess felt that she had a possibility to do so, but her father refused for he believed that she was more useful for the potential marriage contracts he could gain from her hand. It was not until the Princess refused to eat anything for two weeks that the King saw how serious she was, and reluctantly granted her request. For four years the Princess stayed in an convent, and astounded the Abbess there with her quick wit and ferocious dedication to the study of Latin and scriptures.

Yet she was forced in an unexpected position when her father and siblings were killed by the plague, caught when the Royal Family had met to attend Christmas festivities at court.

As the only heir to the throne, she was offered Papal dispensation to  leave the Convent, renounce her vows and marry. The Princess Mary did something completely unpredicted however, she kept her vows as an nun yet still claimed the Crown of Izzyshipper.

Whilst reluctant to grant an unweddable woman the Throne, the Privy Council knew it was dangerous to try and establish Salic Law prohibiting Mary's succession, with the disaster of Queen Alexandria's usurping.

Therefore Princess Mary became Queen in 1542, the first woman ever to do so. 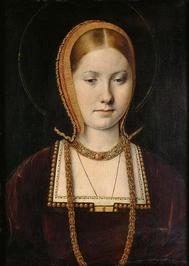 Queen Mary I
Queen Mary's reign was controversial, while it is undeniable that a large part of Her reign left the Kingdom prosperous, many argue she took very conservative and backwards steps.

She repealed Her fathers laws allowing scholars to criticise the role of the Church, appointed half of the Privy Council as members of the Clergy, and granted swaths of Lands to the Bishops.

However, she is credited with one of the largest reforming of the Justice system that was ever undertaken at the time. Known as the Marian System, each constituency (around four or five villages) was to be under the ward of four Knights of the Realm. If someone was accused of an crime, instead of  the traditional village rough retribution, the accused was to be taken before a Knight of the Realm. If the Knight deemed there to be merit in the claims, then the accused was brought before the most senior member of the Clergy available, who would hear evidence before pronouncing an sentence. The Knights duty would then be to carry out whatever sentence was passed. The Marian system was used until 18th century, when the Protestant House Maddox became the Royal House.

Queen Mary also passed the Sancto Carta, or "Holy charter" which gave an full list of the rights of The Commoners, Nobility and Clergy. Widely considered fair for the time, granting basic property rights to women and the outlawing of the little used serfdom that still existed in Izzyshipper. It also prevented any person in Izzyshipper the status of slave.

Mary died of Smallpox in 1584 after an 42 year long reign, aged 67. The throne went to her cousin Albert, Duke of Faranay.

In the early 19th century, King Edward I struggled with the growing republican movement, fuelled by angry middle and working classes tired of having no say in the government, but getting taxed heavily. This was not helped with the King's rising unpopularity as the successful revolution and overthrowing of the Monarchy by the neighbouring country of Prusenia.

While his advisor urged the King to grant some concessions to the masses, the King was obstinate and refused. The King's successful military campaign of the Strath Wars during the beginning of His reign was an important factor for his stability as King. The Strath Islands had been a part of the Izzyerian Crown possessions for generations, but due to an diplomatic dispute between the King of Astralsideria, the Islands possession was in doubt as the King of Astralsideria launched an fleet to invade the islands.

the King's favourite ship of the time, HMS Charlotte, was sunk by the Astralsiderians ship HMSMS Serpentine, the Kings anger was so great that he had the Admiral in charge of the fleet imprisoned for three months.

When he died in 1812 he left a very troubled and fragile Kingdom to his daughter, Princess Isabella.

In 1819, it was decided by Queen Isabella the Fair that to ease the unrest among the population, the public would elect the Queen's Privy Council. The Privy Council was the advisory board of the monarch, and while usually composed of mainly nobles, under this new system anybody could stand for election to become part of it. The Queen's compromise satisfied the majority of the population, restoring the stability of the realm.

In 1945, King Henry III feared his son would be a poor ruler, and his last act of parliament gave the Board of advisers a new power, if they wished they may call a referendum to be held to the population to overthrow the monarch.

King Henry III's fears were proven correct. His son King Henry IV was a poor ruler; desperate to prove his might as King he got Izzyshipper into many dangerous and disastrous wars, leaving both the country and the Kings finances ruined. When the criticism of his reign became widespread the King banned all newspapers apart from ones approved by the Crown. However even after these measure were taken he was still widely criticised and jeered in public, causing the King to pass laws prohibiting "any writings or speeches that criticised the rule of the King" and even set up a special section of the police to hunt down disobedience.

However the King faced problems at home as well as in public. His daughter and heir, Princess Sophia had asked for Royal Assent for a marriage to a Baron's son of the same age, known as Edward Hanner. Her father refused, stating that his daughter would have to marry from another Royal Family or some of the more senior nobility.

However, despite having been refused the Princess Sophia married in secret and fled to the Sevri islands that lie just outside of Izzyshipper, her father having made her the Archduchess of the islands three years earlier. She fell pregnant a year later, and after she gave birth to a daughter she could hide the fact from her father no longer.

The King was enraged, and spent the remainder of his reign trying to remove his daughter from the succession, but to do so he would need to call parliament and gain their consent for any change in the order of succession. During the last two years the King repeatedly called parliament and try to bully them into removing his daughter from inheriting the throne, but was defeated every time. Parliament had grown tired of the King's poor rule, and knew they would never get re-elected if they removed his much more popular daughter from becoming Queen. The King had a heart attack in 1989, from a combination of stress and poor health, and died the following day.

His 19 year old daughter became Queen Sophia I. King Henry IV had left the country bankrupt, army ravaged, and very few friends. She repealed may of her fathers laws, has kept the advisers right to call for an overthrow, and has spent many of her years recovering the economy and in result her popularity is one of the highest any Monarch has ever had. Her main weakness is her over eagerness to please foreign nations and generous foreign policy, as she knows she walks on eggshells after her fathers unpopularity with Foreign countries, and sometimes her father's legendary rage is seen when she feels frustrated.